Is running in Los Angeles bad for your health?

In Downtown Los Angeles there’s a film – not of celluloid, but of soot – covering everything, from shop displays in the fashion district to the tables at high-end cafes.  Blowing your nose at the end of each day proves you breathe it in as well. And when I saw so many people jogging and biking through the streets here  – in this fitness obsessed city – I seriously began to wonder “This just can’t be good for you… right?”

Why exercise outdoors in a city known for smog? It seems counterintuitive. I decided to do a little research and find out if it is really harmful, or just a bunch of hot air.

The American Lung Association releases a “State of the Air” report every year.  In 2011, Los Angeles was #1 in ozone pollution in the country, and #2 in year-round toxic particle (soot) pollution. According to The ALA and a 2008 study by the National Research Council, air pollution aggravates asthma, heart and lung disease and diabetes, and can have a severe effect on children, stunting lung growth. Diesel emissions have been linked to cancer. According to the state Air Resources Board, 9,200 Californians die prematurely each year because of dirty air. Research has also connected a higher risk for these diseases directly to exposure from exhausts of heavy traffic and busy highways.

Now imagine running in that air! You increase your intake of oxygen while running, and subsequently the amount of pollutants. The Beijing Olympics weren’t so long ago as to recall the struggle many Olympian faced when training and competing in China’s own pollution problem.. US Olympic Mountain Biker Adam Craig, went into bronchial spasms because of the air. It’s like suffocating. Craig was unable to fully breathe in the air his body needed. 30 minutes into the competition, he had to quit.  And he wasn’t alone. Many athletes experienced similar problems performing at their peak in the pollution.

While Los Angeles might not be as bad as Beijing, and smog and soot levels have dropped in Southern California over the last decade,  the region still has the highest levels of ozone nationwide, violating federal health standards an average of 137 days a year.  Apparently, it’s getting better, but unfortunately not quick enough to make an impact on our health…sorry Angelenos. 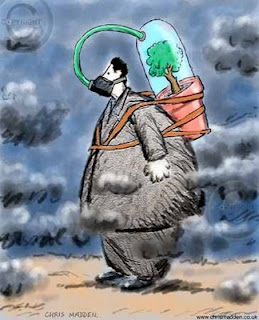 So what can we do? Give up our cars, build reliable, and convenient public transit, plants more trees, and offer more pedestrian and bike friendly means of getting around town…like, tomorrow. And if none of that is happening in the immediate future? Then be smart about activity. Check the air quality before rigorous outdoor activity. My Environment on the EPA’s website provides hourly air quality forecasts. Airnow.gov is another  site providing air quality maps. If you must workout outside, do it when traffic is light. Early morning hours are ideal.

So it seems the answer is yeah…running in Los Angeles is bad for you. But, what’s worse – not exercising at all, or doing it in a polluted city?  Both can cause shorter life expectancy and an array of diseases. Until there’s more research, I’d venture to assume it’s better to exercise than just sit on the couch…though you won’t catch me running through the streets of LA, for fitness purposes anyway, anytime soon.