Fitness and Fashion: Why we wear sneakers and shorts

Funny how fitness fashion often leaves little to be desired. Athletic wear might be a trend for Spring 2012,  but we’ve yet to see Anna Della Russo sporting workout wear on the streets of Milan.  And yet, despite its lack of fashion sense, women’s sporting wear has made major impacts on how we dress today, from work attire, to the perfect cocktail dress. Here are a few historical sportswear facts that highlight the fitness impact on the fashion world: 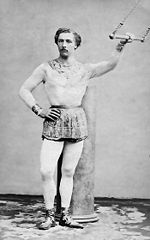 The first skin tight bodices were crafted by Jules Leotard during the Victorian era of the late 1800s. The leotard was made solely for men, namely circus performers, while women performers kept to inflexible and rather dangerous corsets. While men still wear leotards, or “biketards”, for cycling, swimming, rowing, etc, the name will forever be synonomous with women and dance fashion.

One of the first pair of rubber soled, canvas shoes was created by Charles Goodyear – yup, the same name associated with tires. In 1916 the shoes, called Keds, were mass-marketed as the first sneaker. The name “sneaker” was bequeathed by advertising man Henry Nelson McKinney, because the rubber sole made the shoe so quiet.

The fabric of choice for women who golfed in the early part of the 20th century was tweed. Hmm…sounds heavy.

While long layered skirts slowly became long wide-leg plants, it wasn’t until 1932 that Alice Marble made waves walking out onto the tennis court in shorts at Wimbleton. The world was aghast, but thankfully, we never looked back.

In the 1800’s women wore skirts and pantaloons made of heavy fabrics that would not become see-through in the water. They also came with weights sewn into the fabric to keep the fabric from floating up.  It took decades of fighting for women’s rights coupled with the invention of Lycra around the 1930’s that brings us to the swimwear and bikinis we know today.